With a magnificent view Kefalos bay and the island of Ag. Nicolaos (Kastri), a new, rebuilt space, has been created and offers an accurate embodiment of the daily life of the islanders of the past century as well as the period of the Italian possession of the Dodecanese.

Mylotopi is located in Kos, right in the heart of the village, Kefalos, a few meters from Kefalos Castle. There you will be able to browse all the places you can visit and meet the tradition of the place. The multi-site has a traditional threshing floor with the presence of a donkey, a traditional stone oven, a totally functional restored windmill and a traditional farmhouse that represents the life of a family in the 19th century.

In all areas you can travel through a tunnel (formerly a construction of Italian soldiers), which leads to a former outpost, now a food and drink area.

Permanent residents of Kos Island, with their will and respect for tradition, recreated this multi-purpose space, wishing to teach young people and remind the old, the cultural background of Greece in general and of the Dodecanese in particular. They labored this work effortlessly and gave life to the memories of the elders. The reconstruction of the exhibits began to materialize in the winter of 2016 and finished in the spring of 2018, leaving the promise that this work would be expanded.

The place where the grinding wheat process was taking place is incarnated with the presence of the stone threshing floor. This process used to be done by the muleteer (the one who guided the animals), the harvesters (those who distinguished the fruit from the ears) and the donkey which, with its insistence, completed the process. 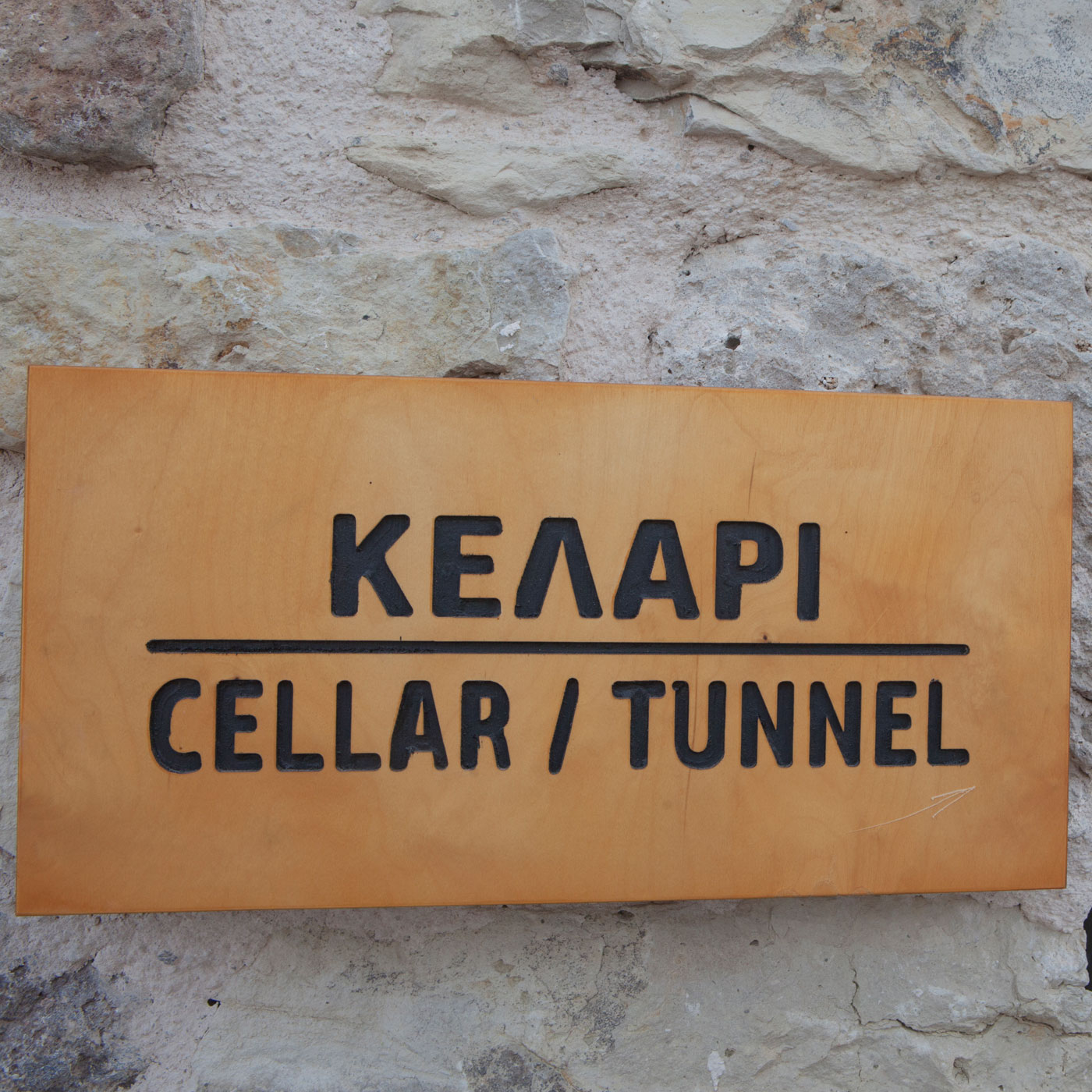 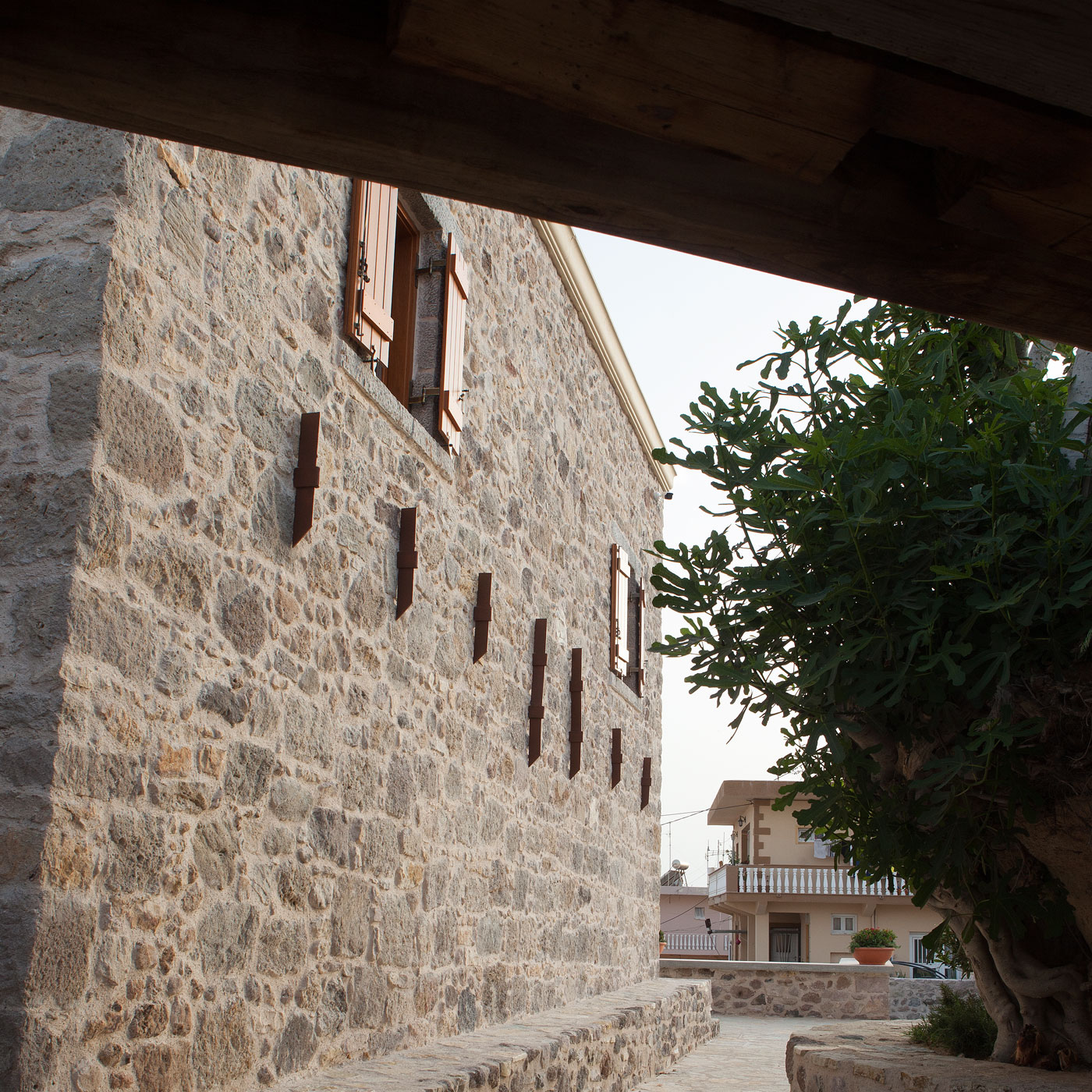 The 20-meter tunnel was crossing the courtyards at Mylopi. Crossing the Italian tunnel, you will see the cellar and exhibits by the Italian soldiers, who used to perform their guard during the Italian domination. Its exit will take you to the backyard, now used as a recreation-restaurant space.

The over 100-year-old stove is stone built in its entirety and it is estimated that its walls have a thickness of 80-90 points. The “pores” of stone, as they are called, exist only in Kefalos, because of the volcanic ash from the volcano of Nisyros. It is functional until today and is used to roast traditional dishes and mainly bread. 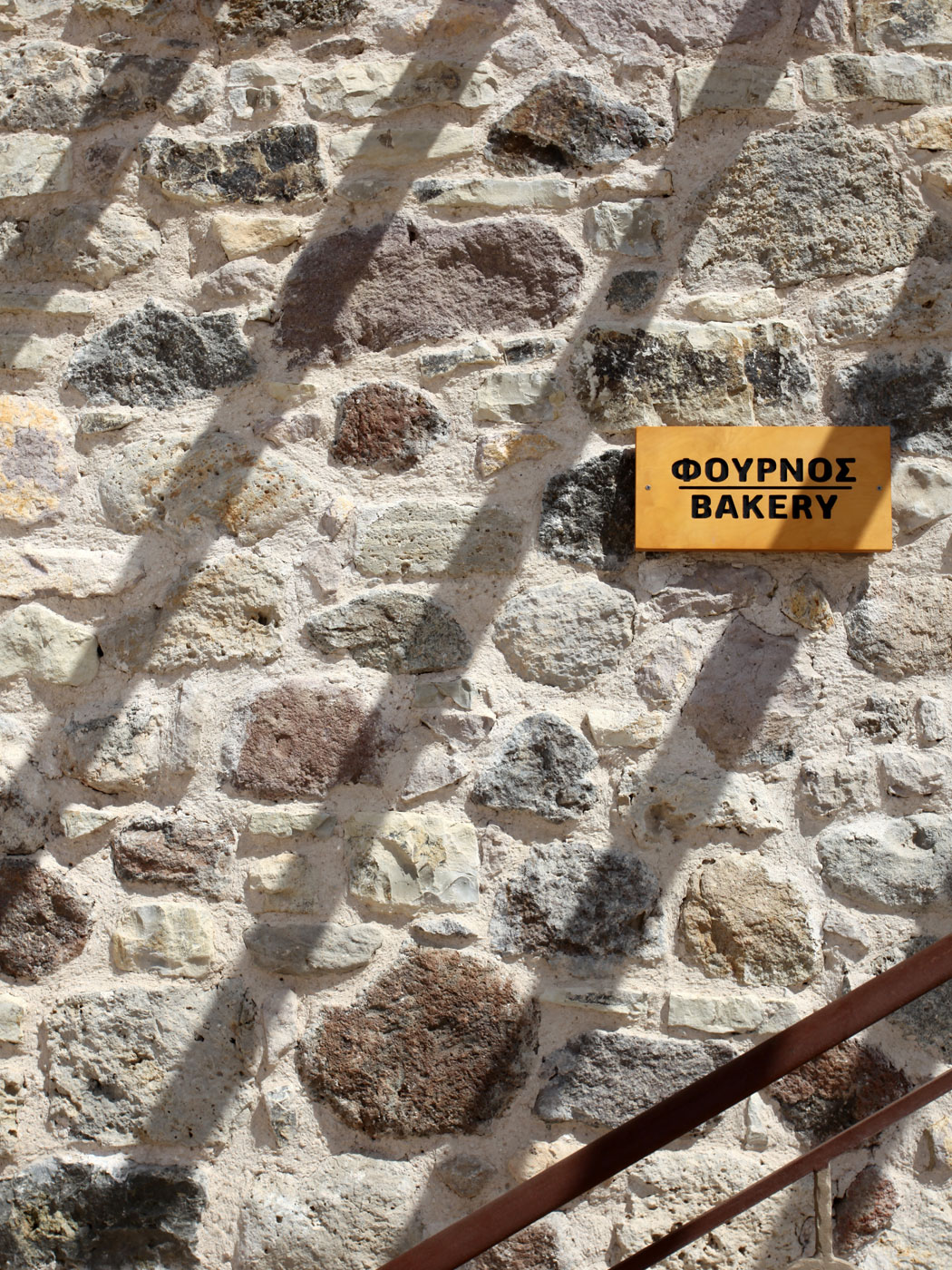 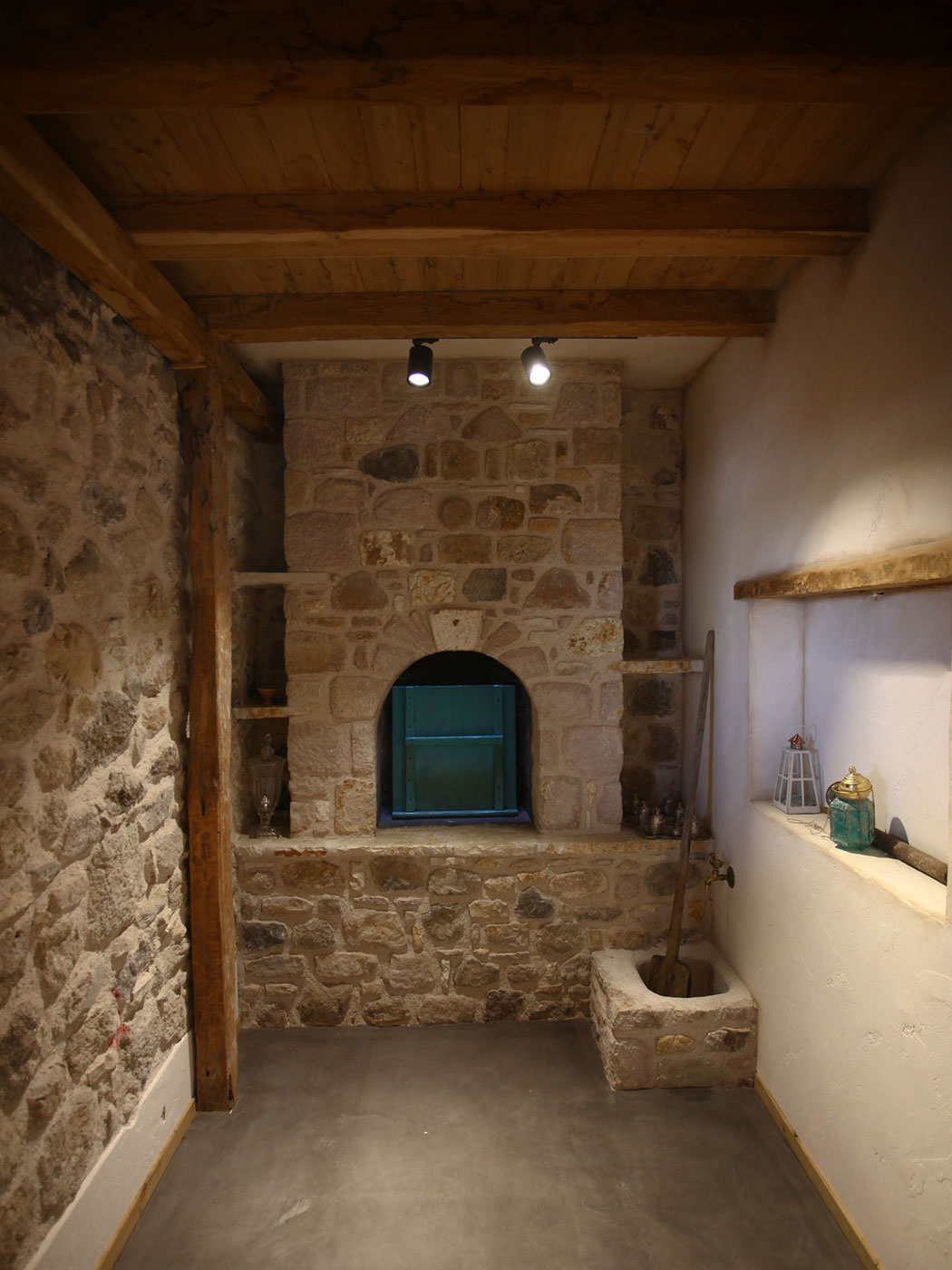 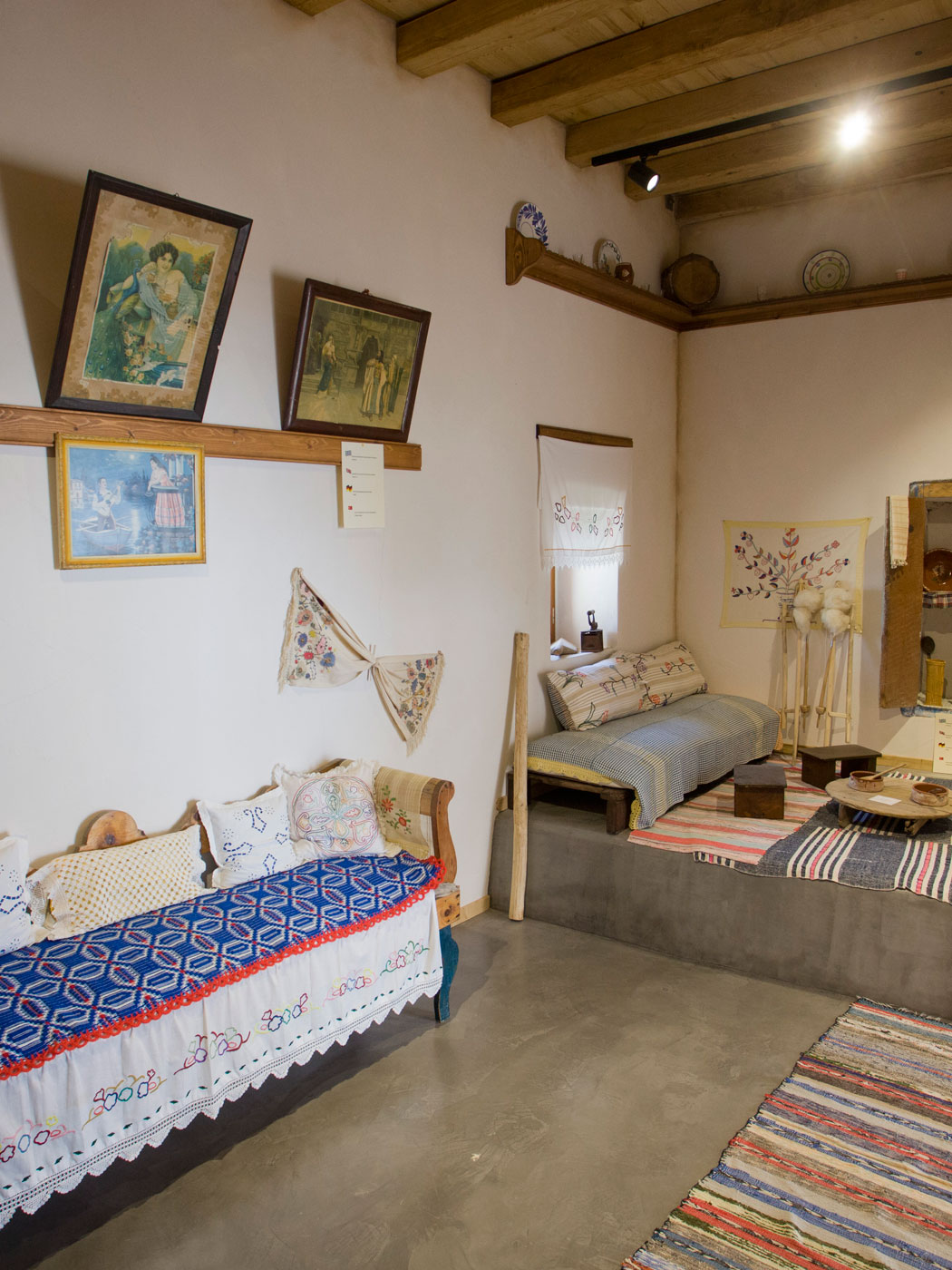 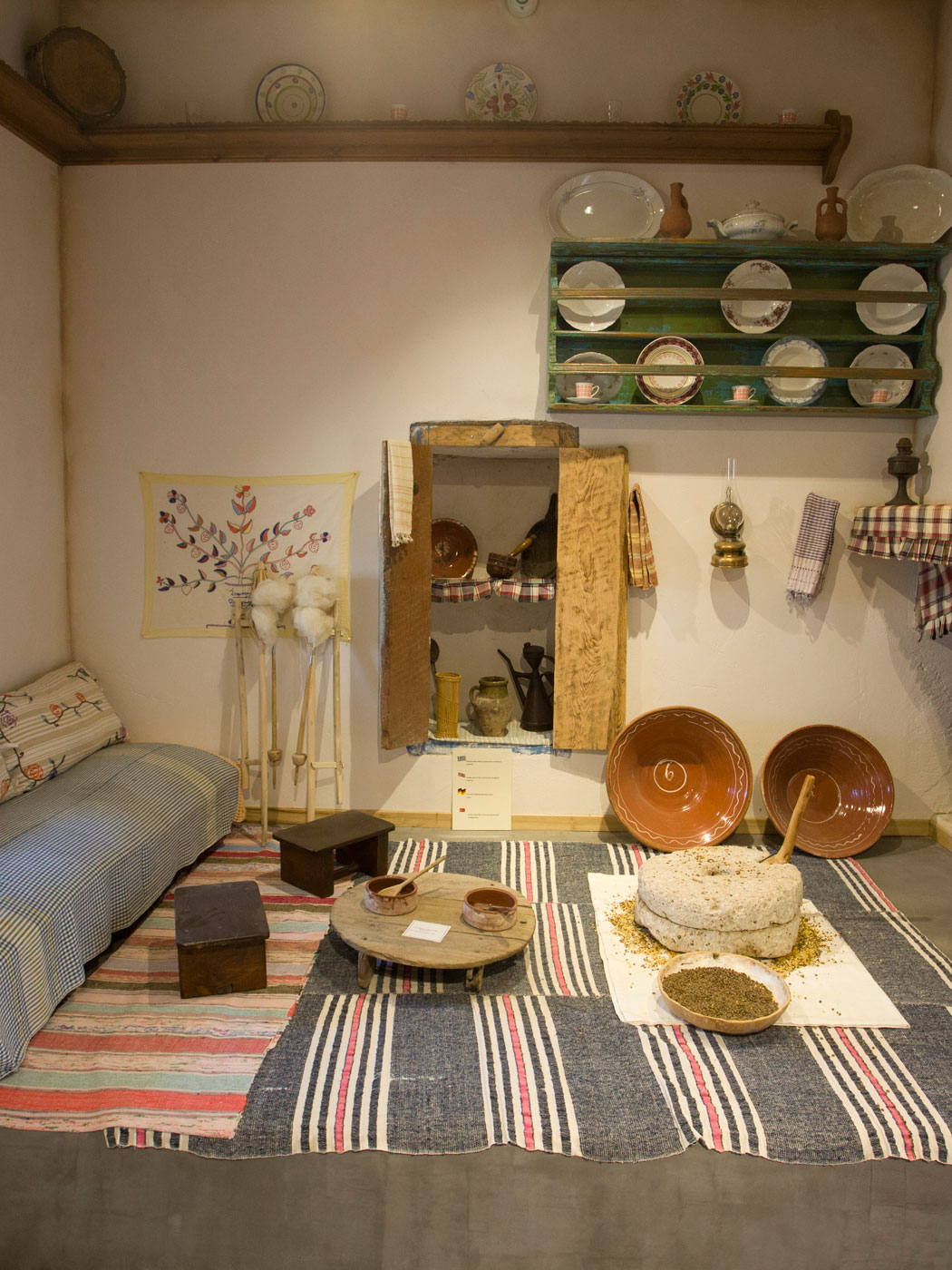 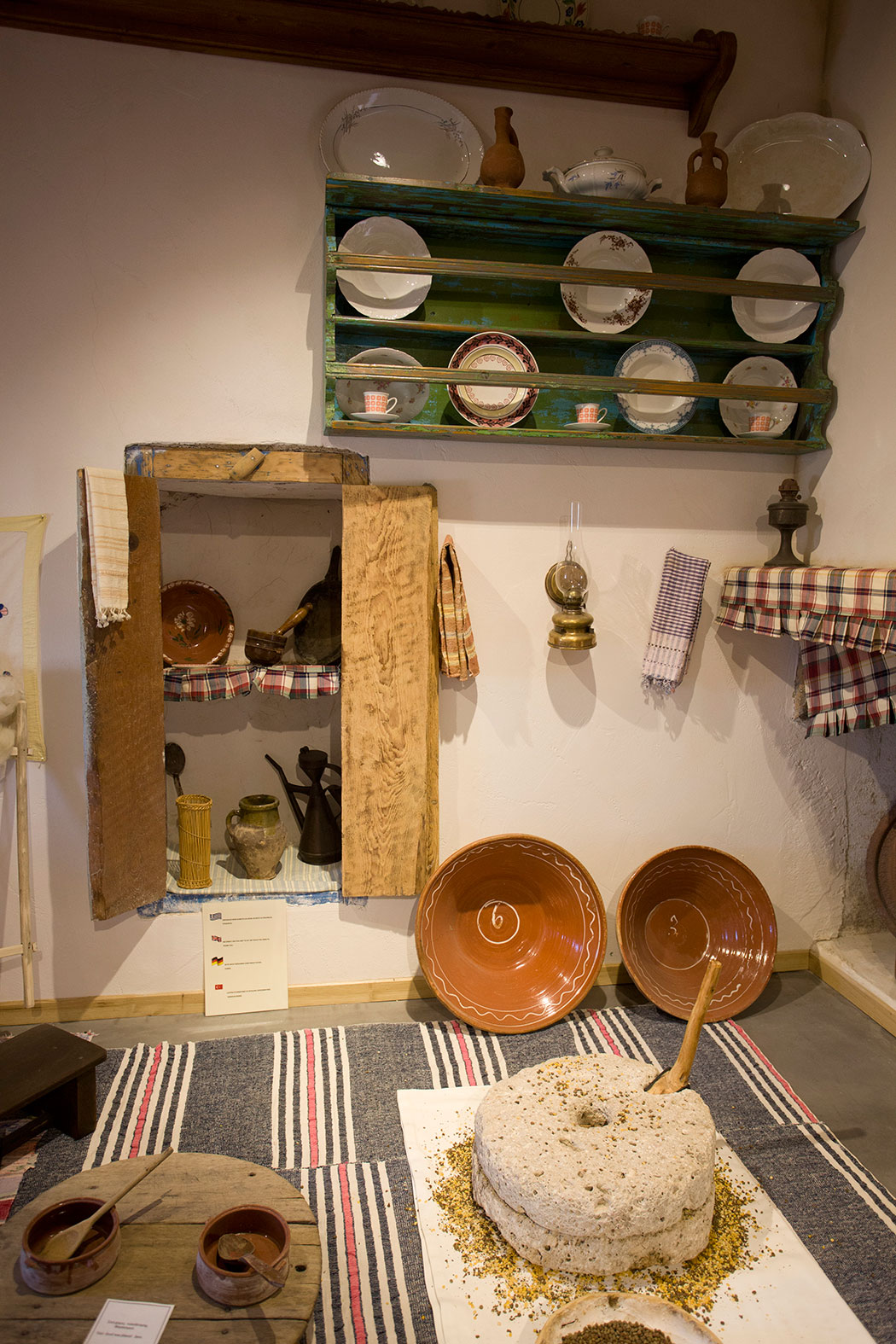 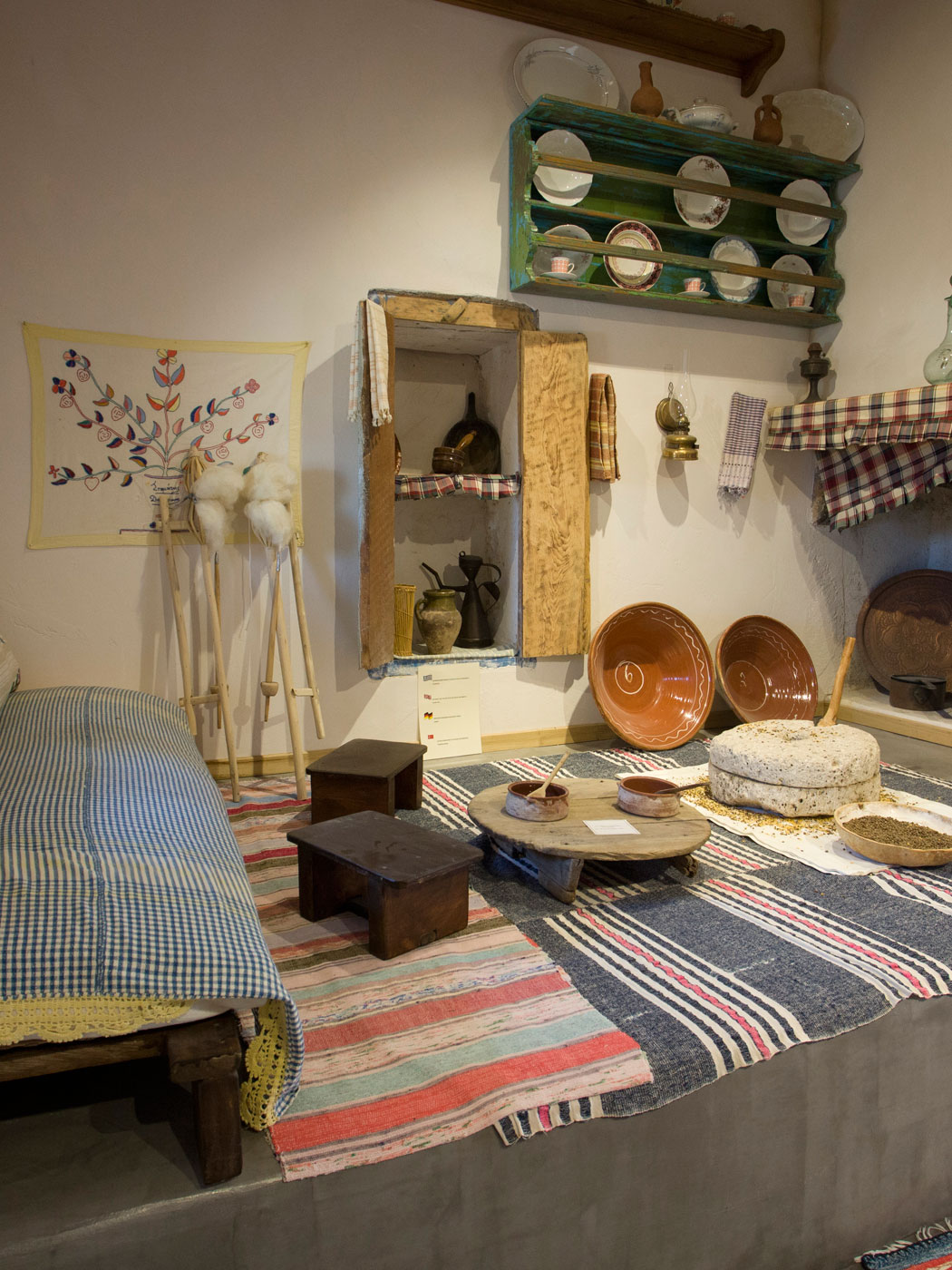 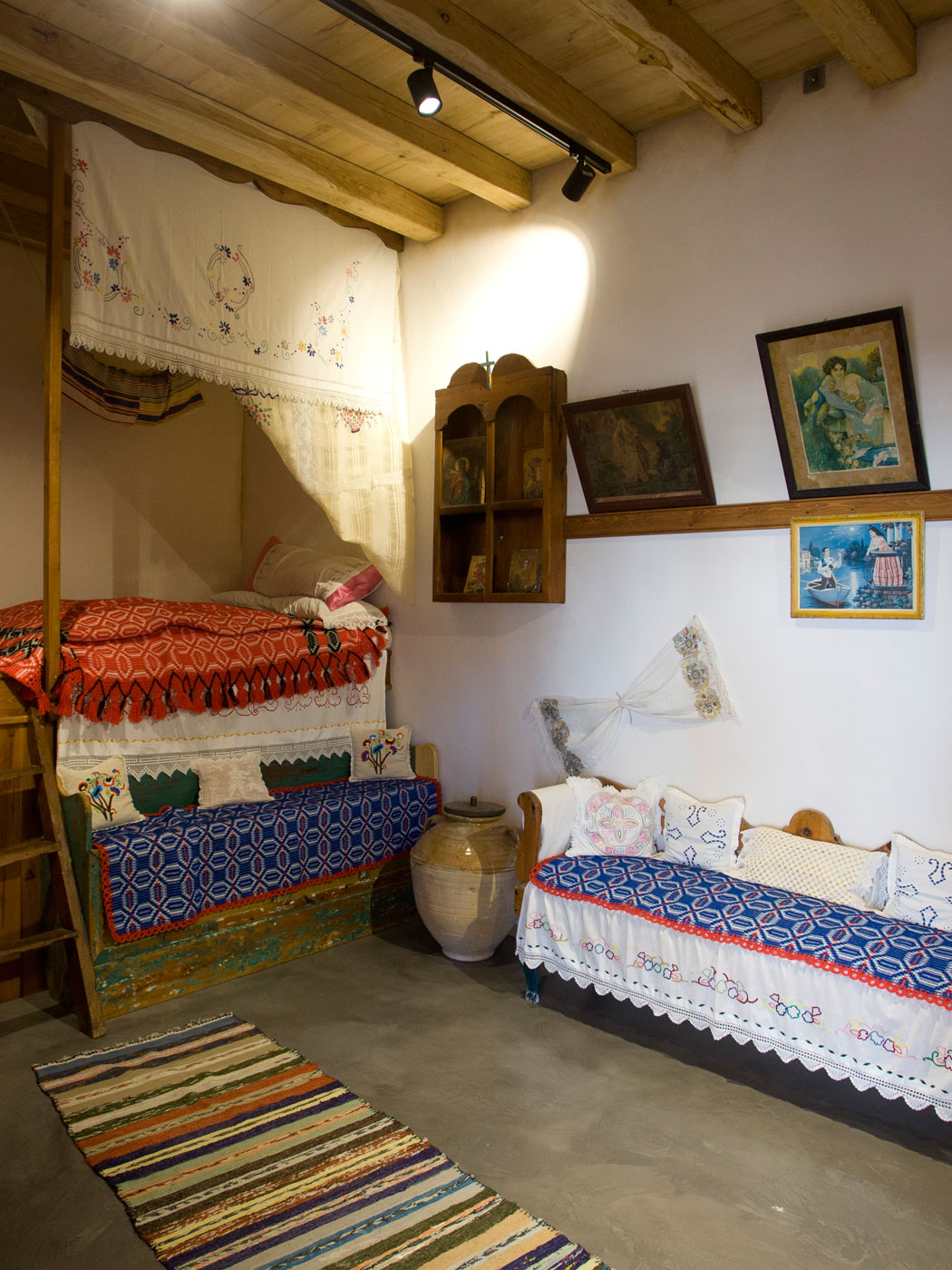 The traditional house is depicted and embodies the life of a rural family in the 19th century. It revives their lifestyle and habits. We meet their everyday dishes, their way of relaxation and their intelligence in building functional objects to meet their needs.

This particular windmill is one of the oldest Dodecanese Mills (characterized as a monument of cultural heritage with the Government Gazette) and guides us through the way of grain milling, leaving its own history over the years. Its 1,000 to 1300-year-old woods tell us its key and main role in antiquity. 80% of its timber existed, while the rest was filled with timber from Mount Athos (chestnut trees). It is fully operational, after 7 months of work from the boat carpenter Mr. Dimitris Morakis. Its height is estimated at 6.2 meters and the thickness of its walls reaches 1.20 meters. The roof is made up of a 6 meter upside-down boat. 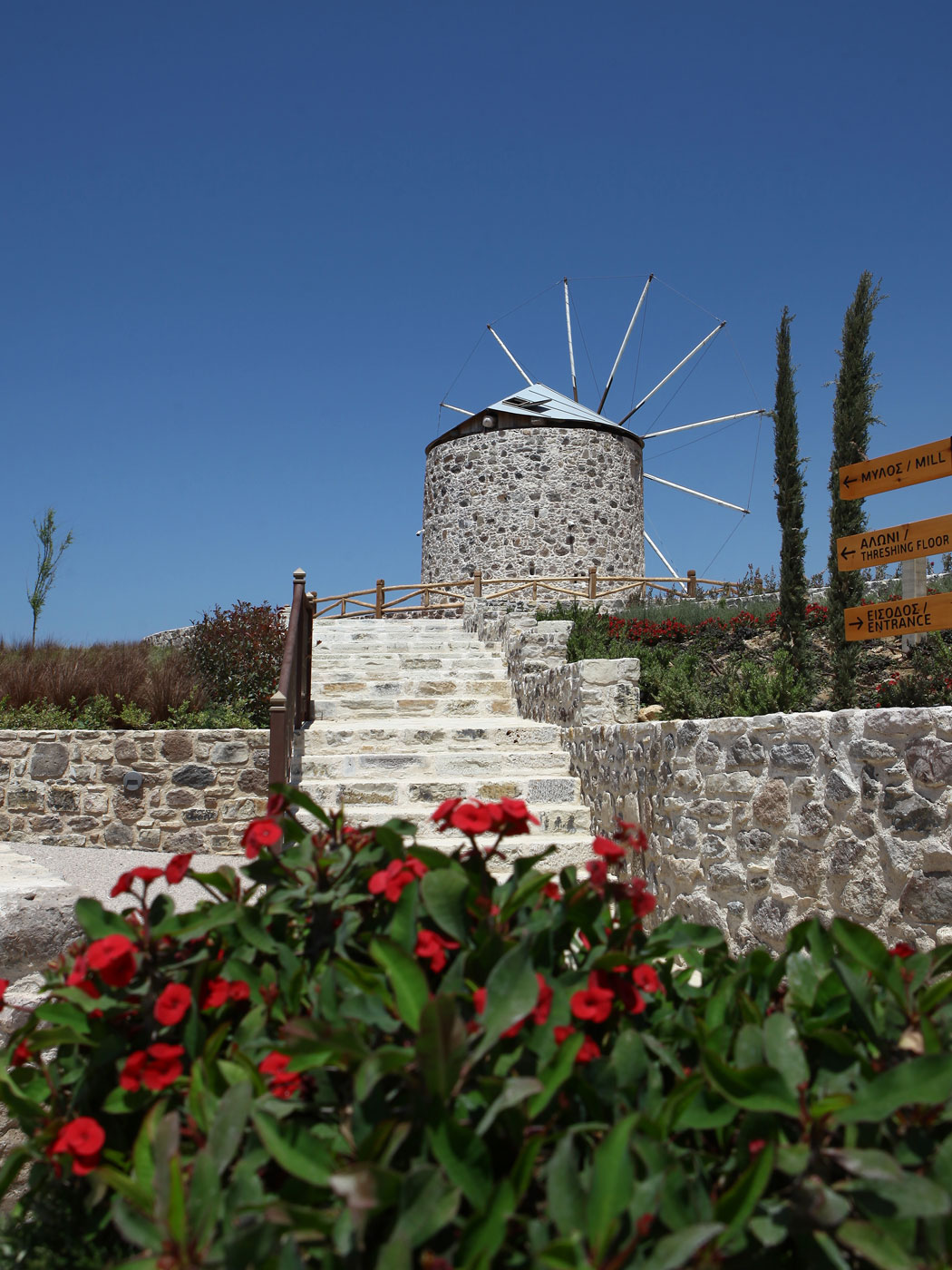 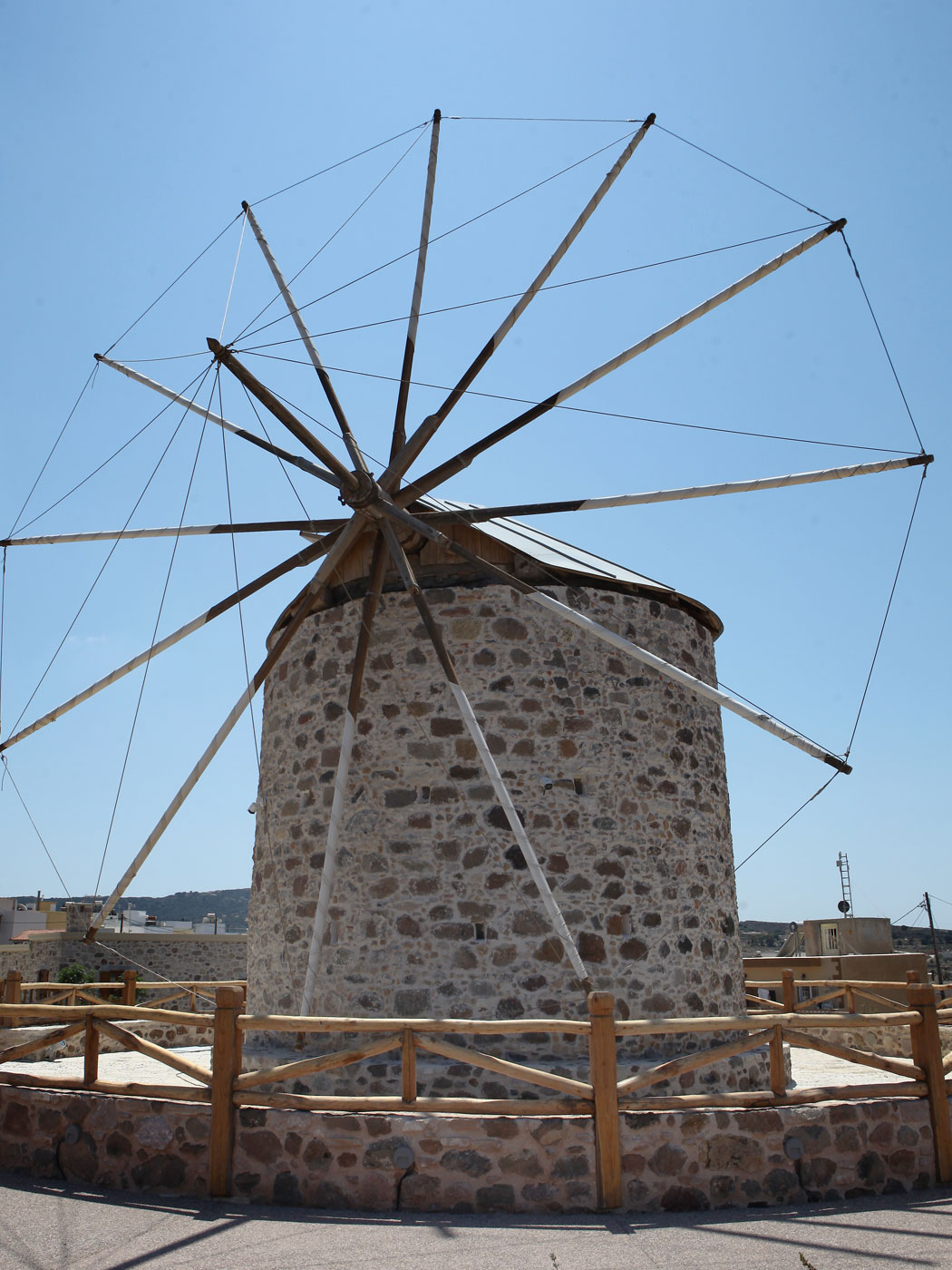 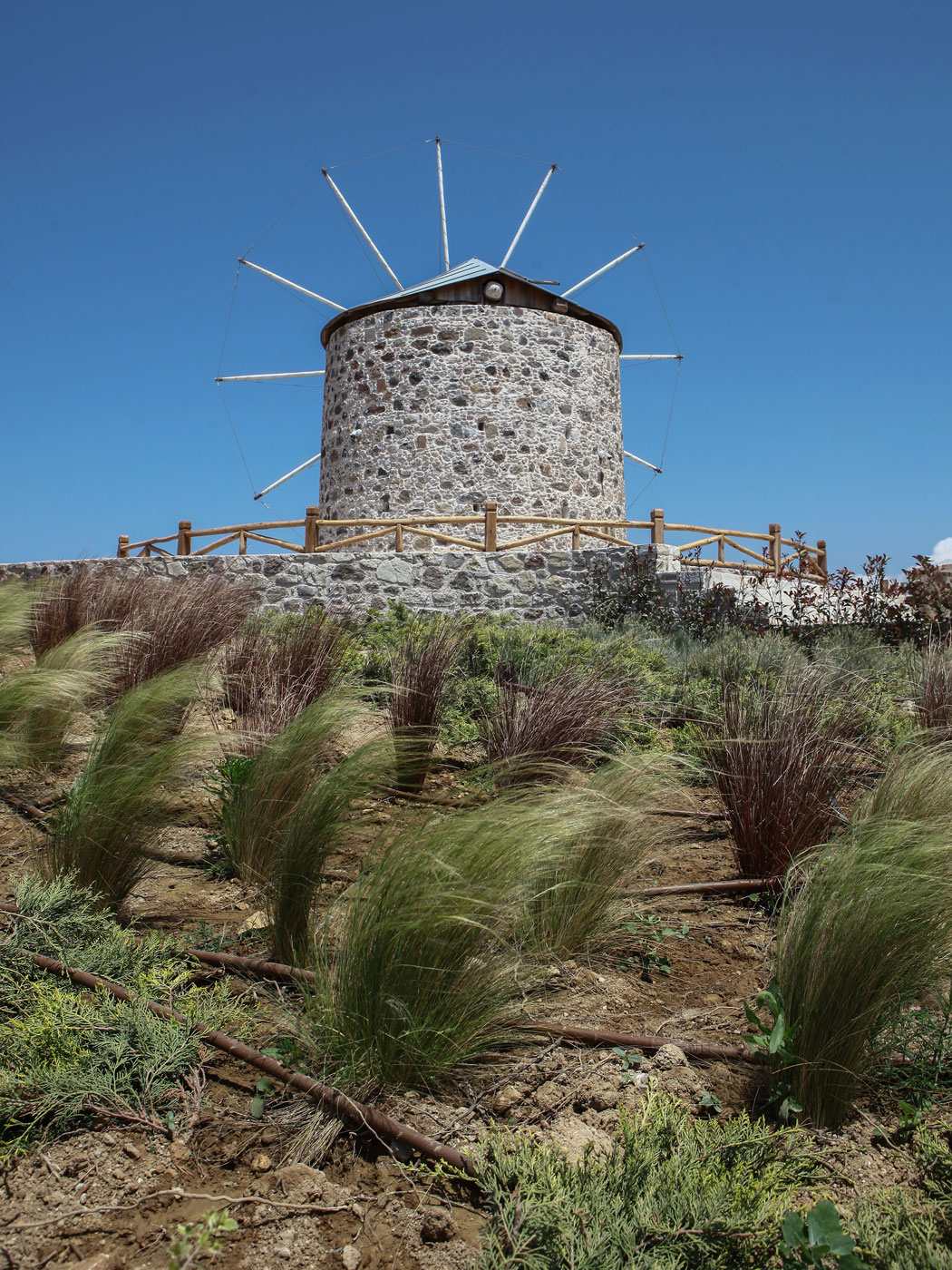 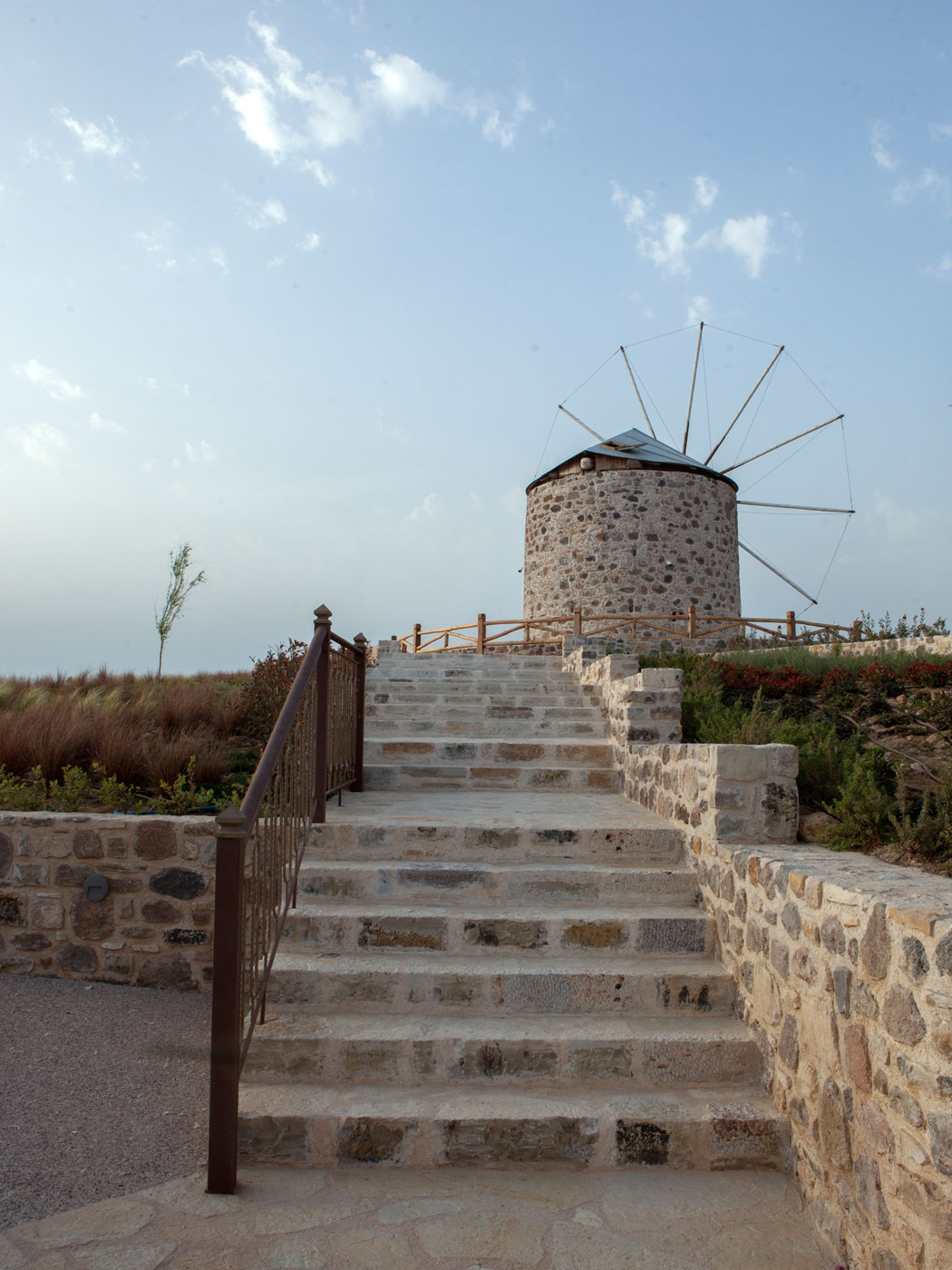 Its basic features are its woods (chestnuts) that besiege its interior, sent from Mount Athos and made in the hand. The technique of binding the building around is the same as the Knights’ technique at the Grand Master’s Castle in Rhodes (14th century).

The irons thus penetrate the octagonal walls and 35 cm woods and hold the loft in the air … All the atmosphere of the space travels you in earlier times, and this makes the younger to learn and the older ones remember and relive with nostalgy. 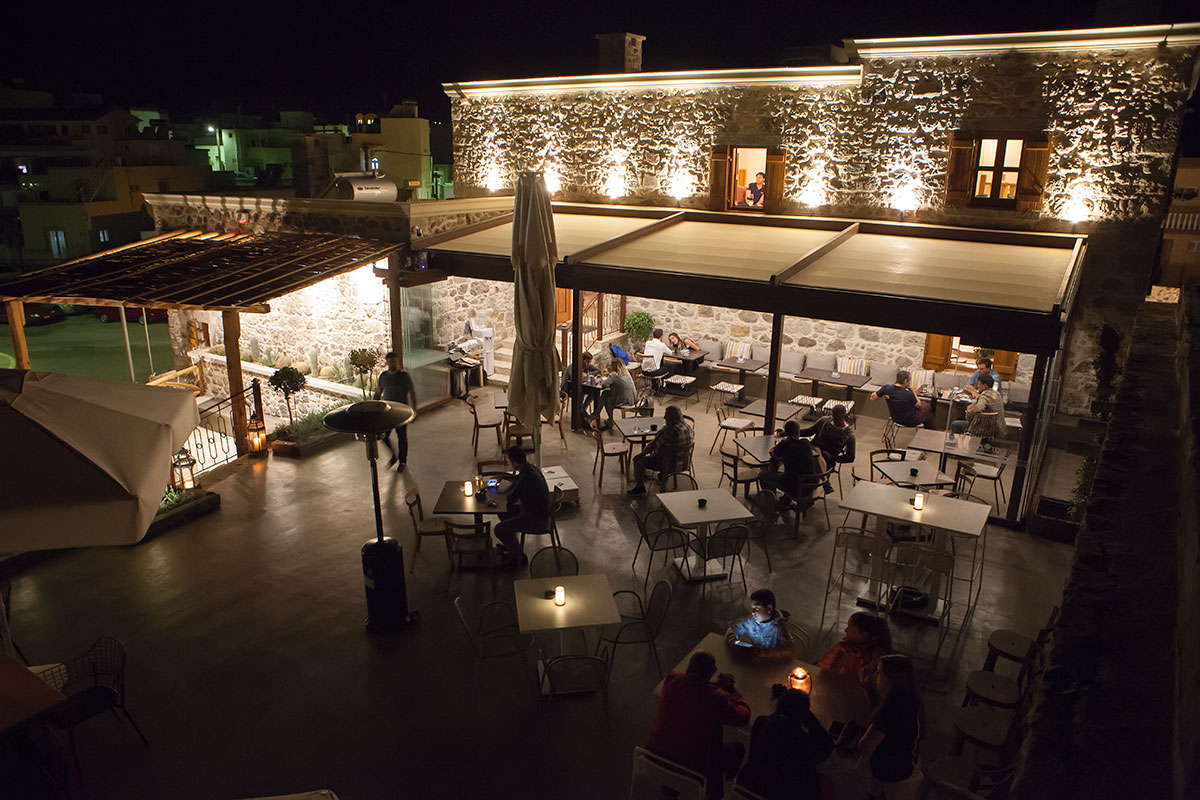 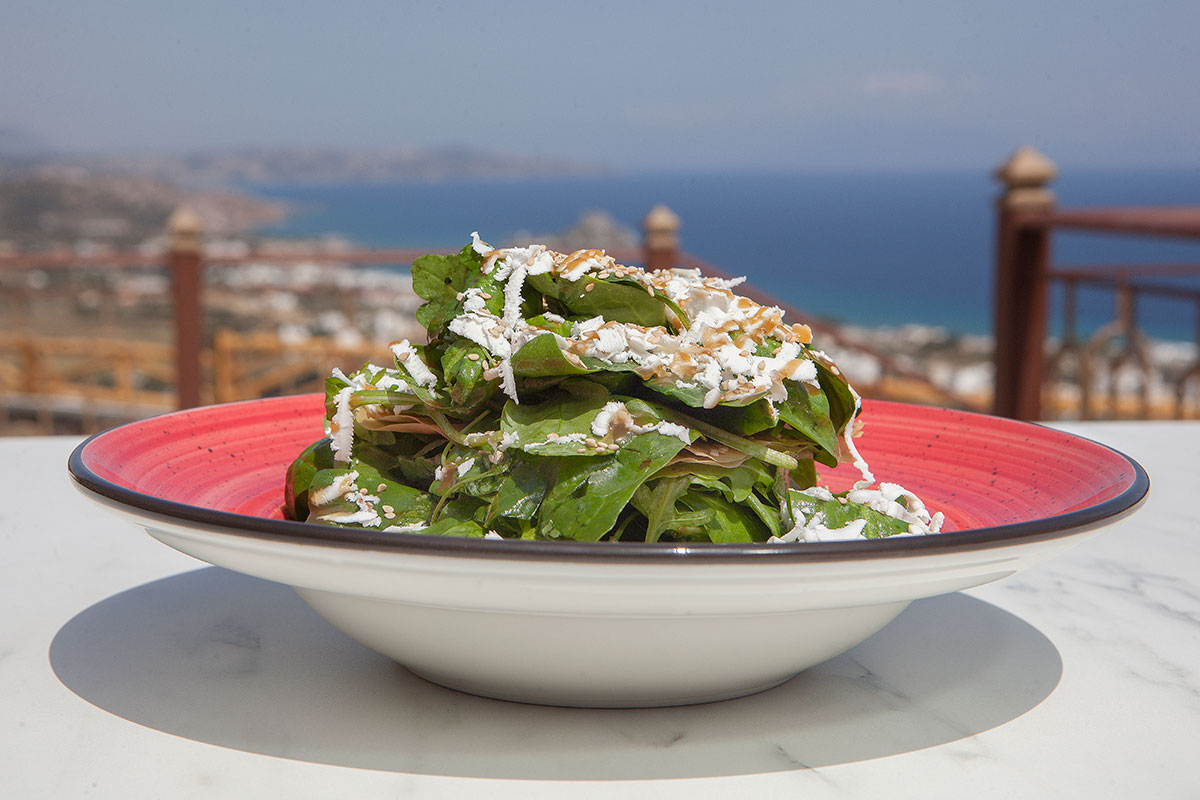 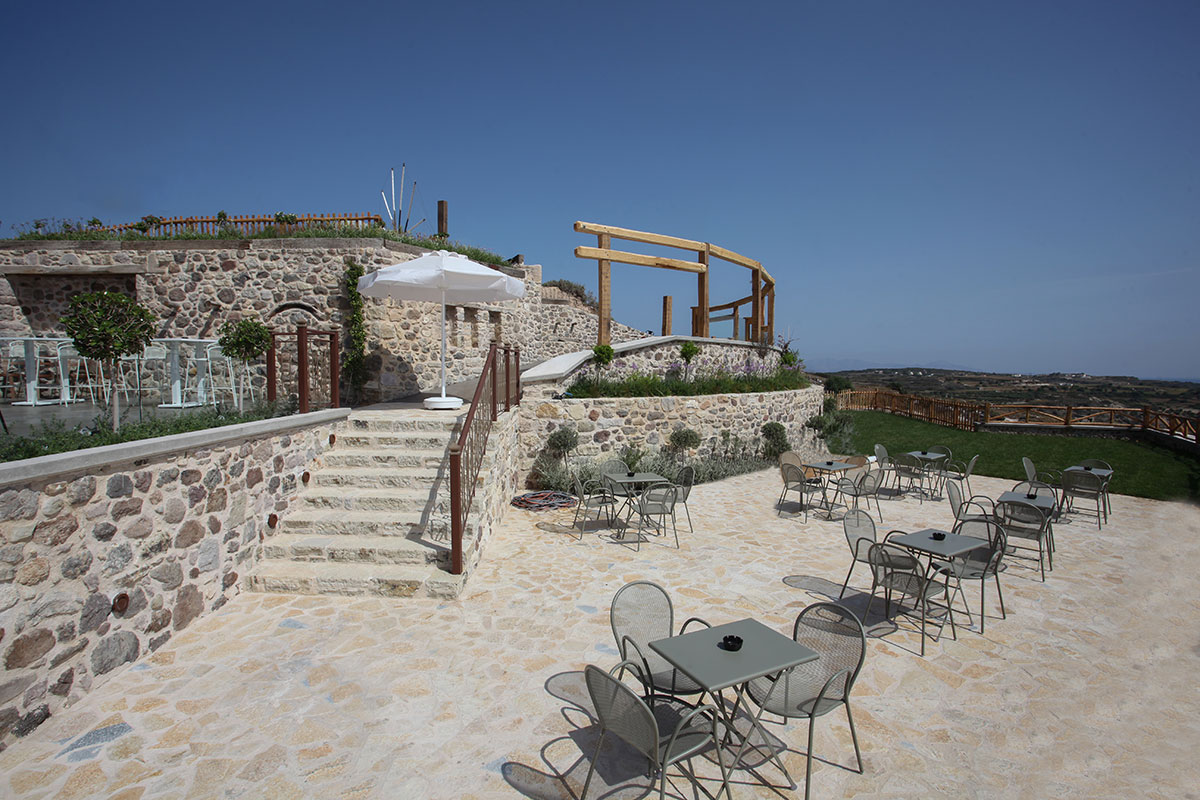 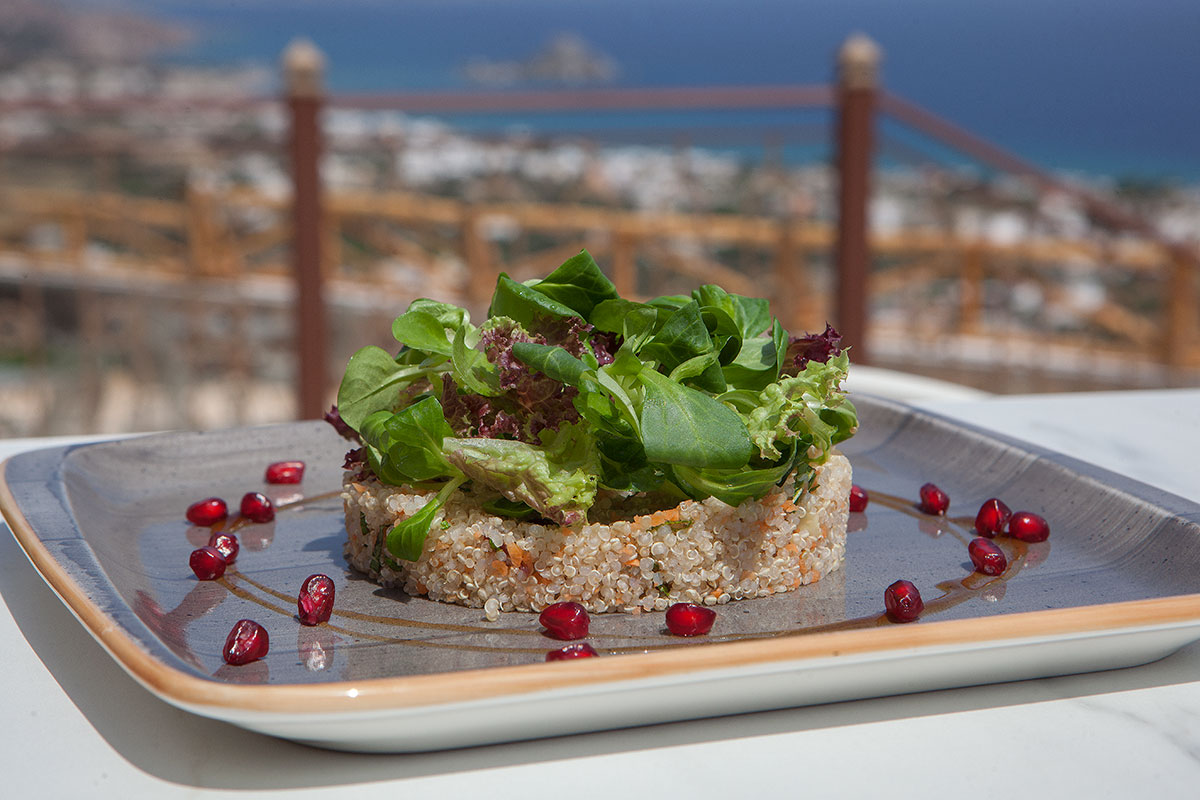 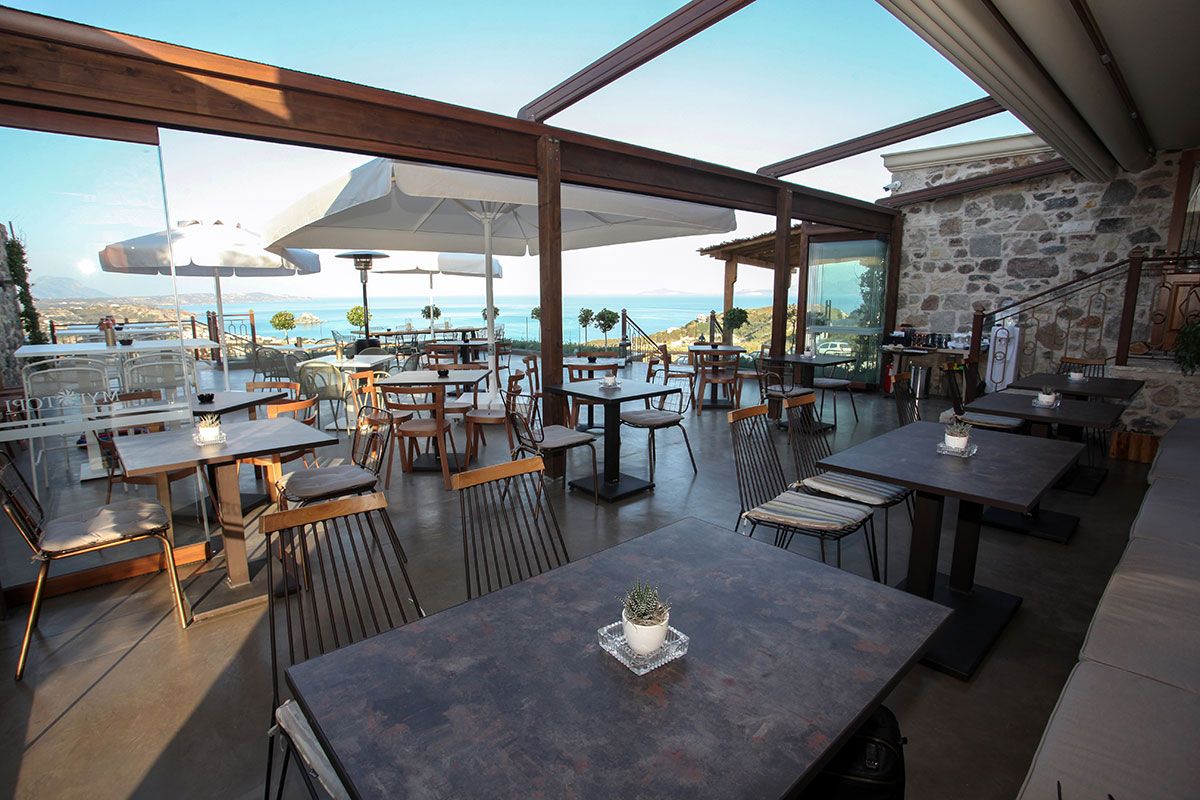 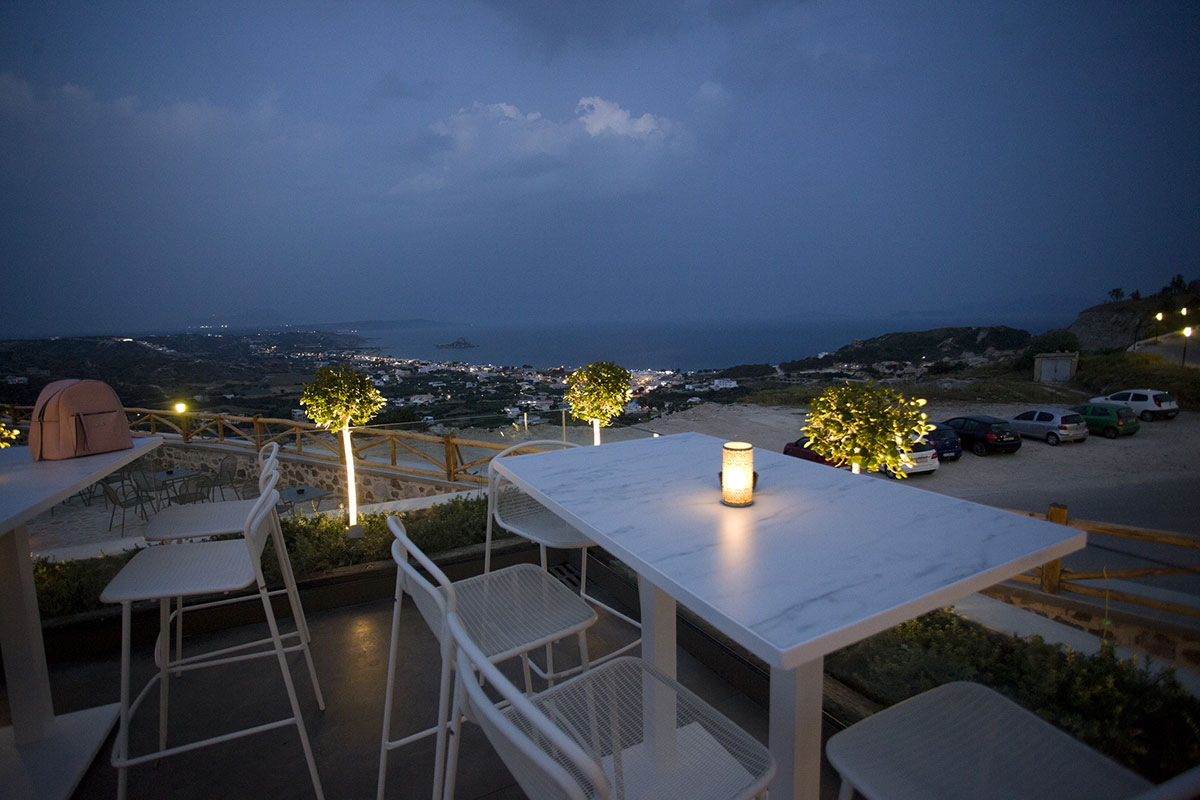 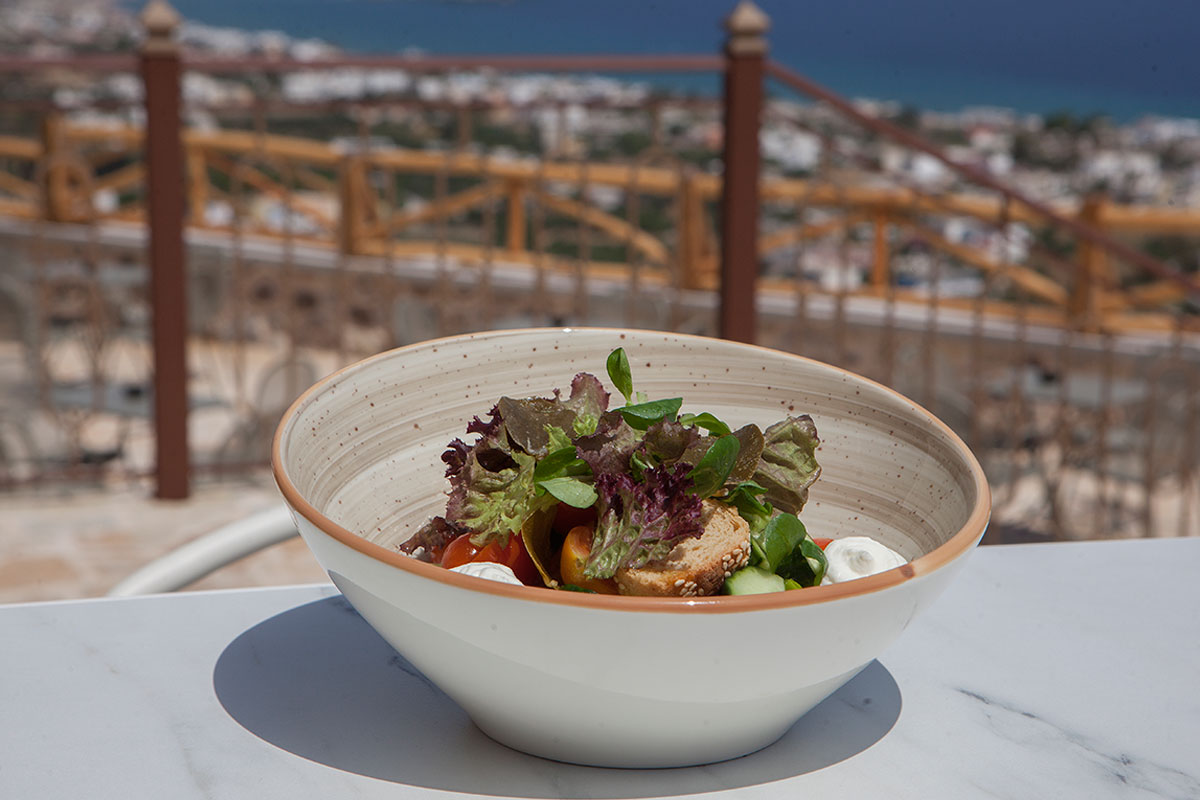 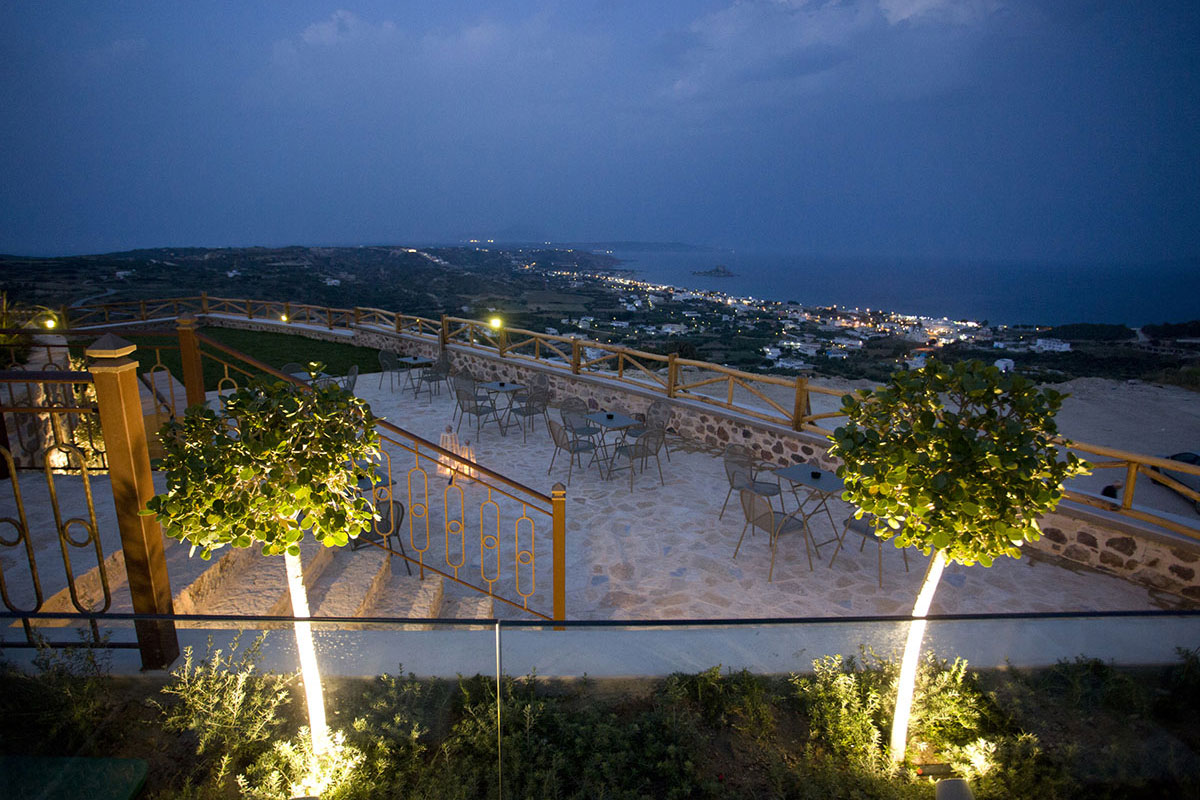 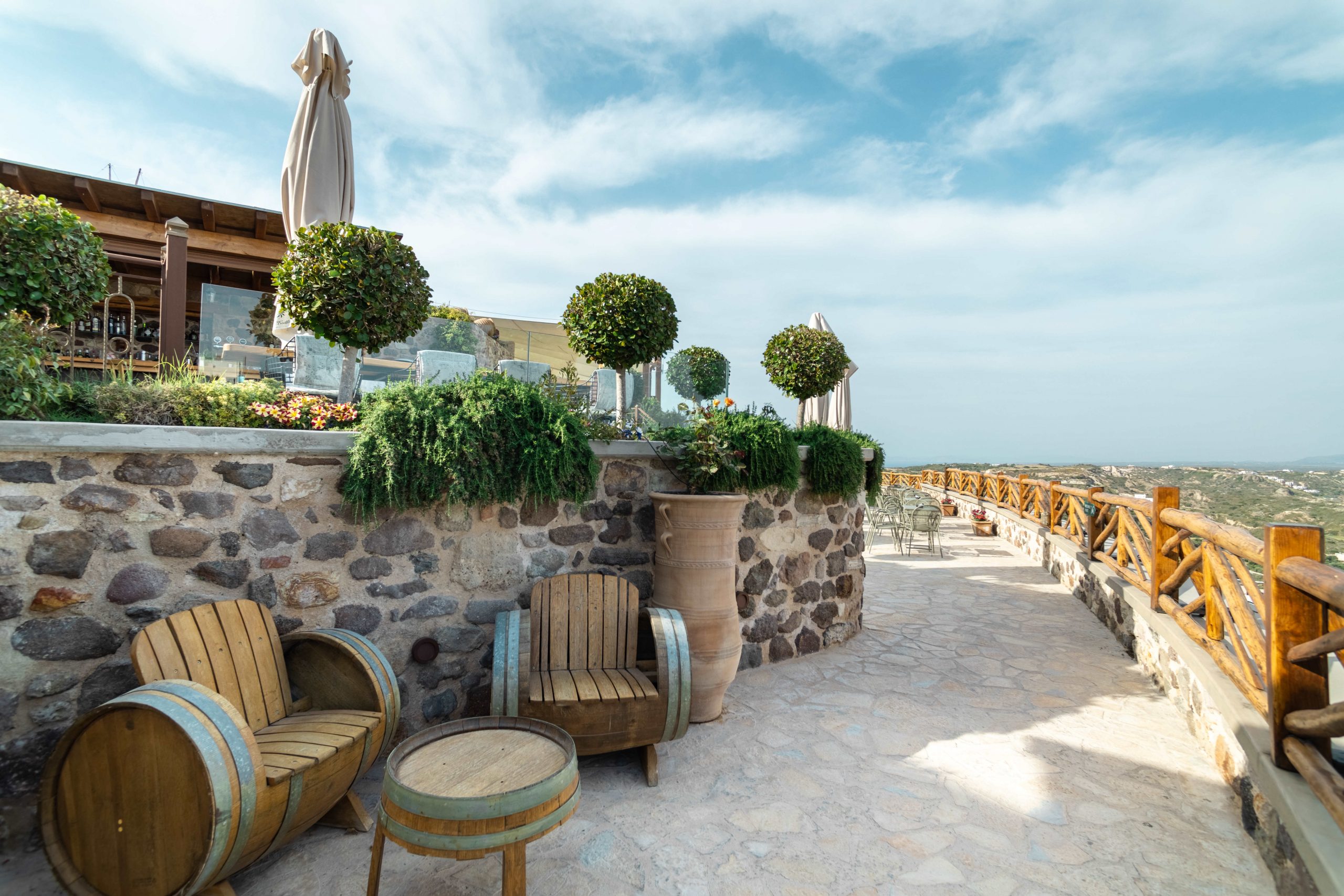 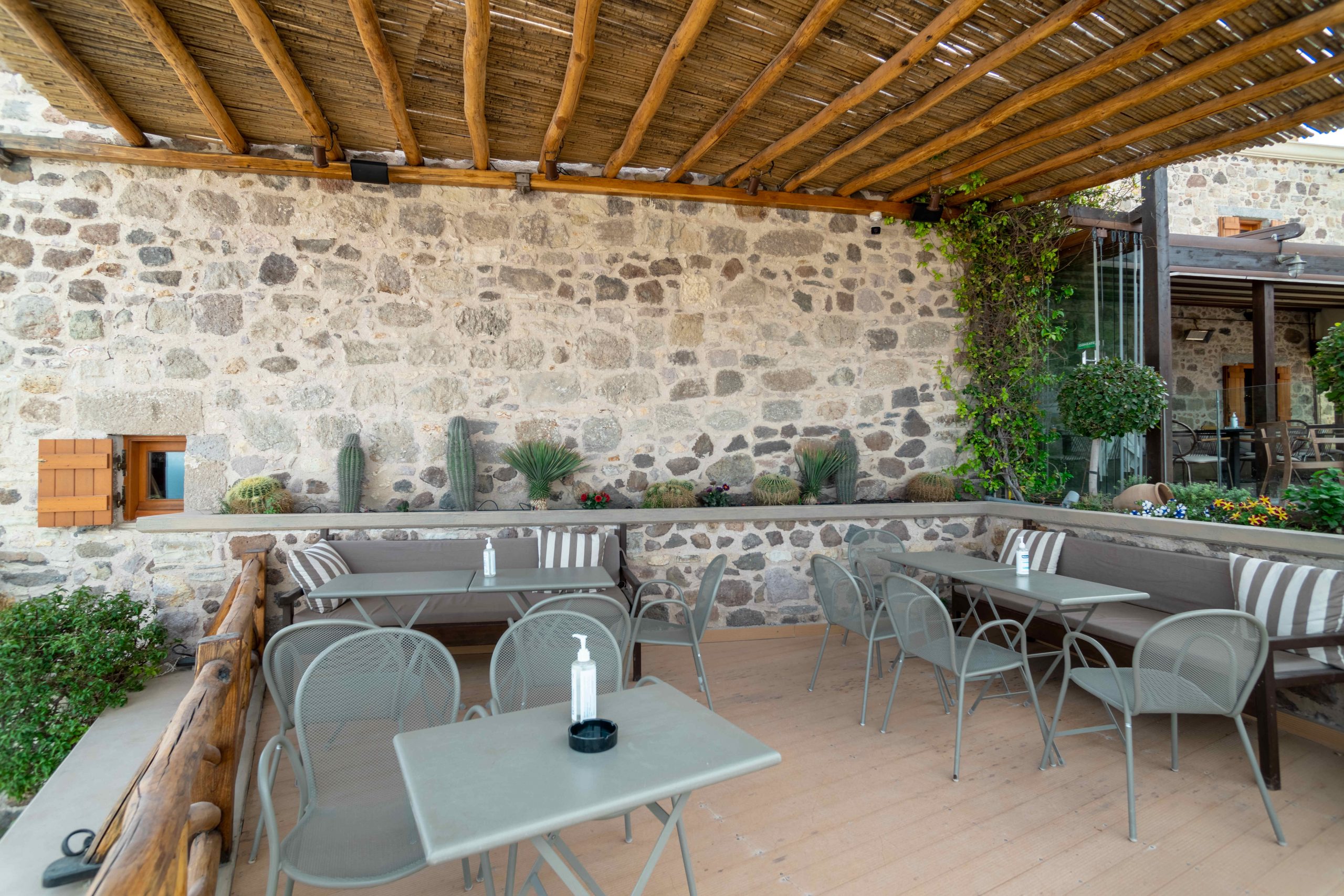 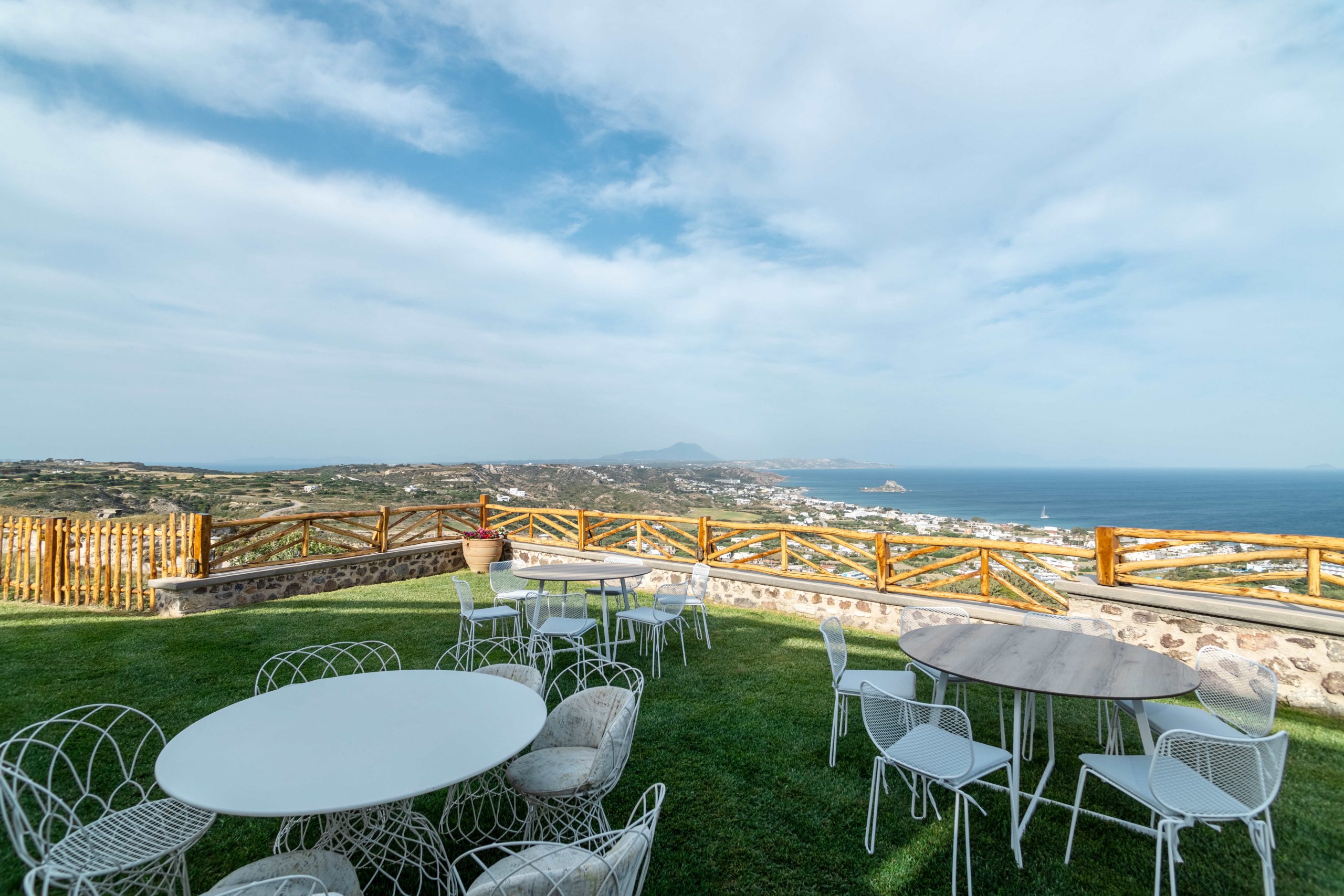 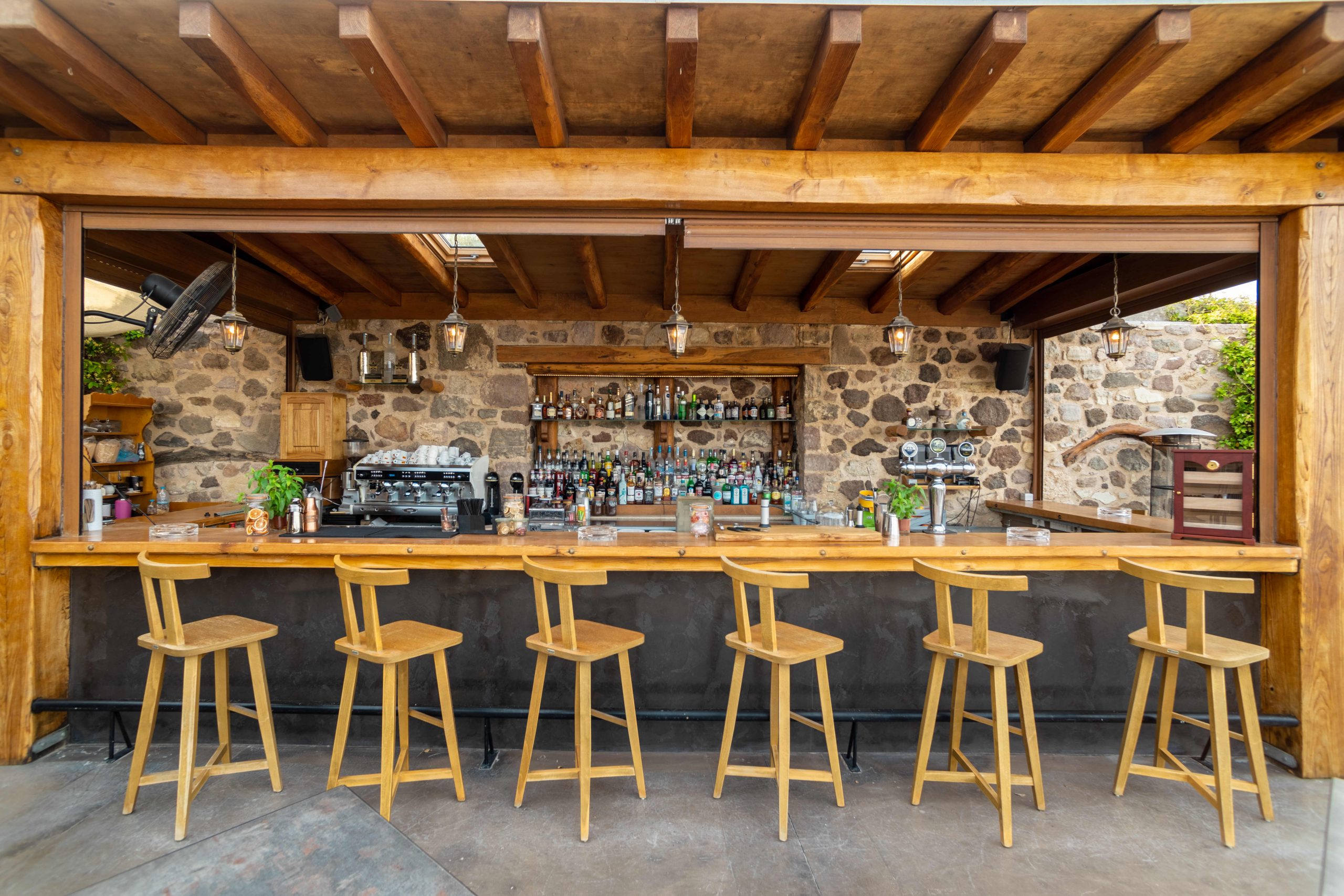 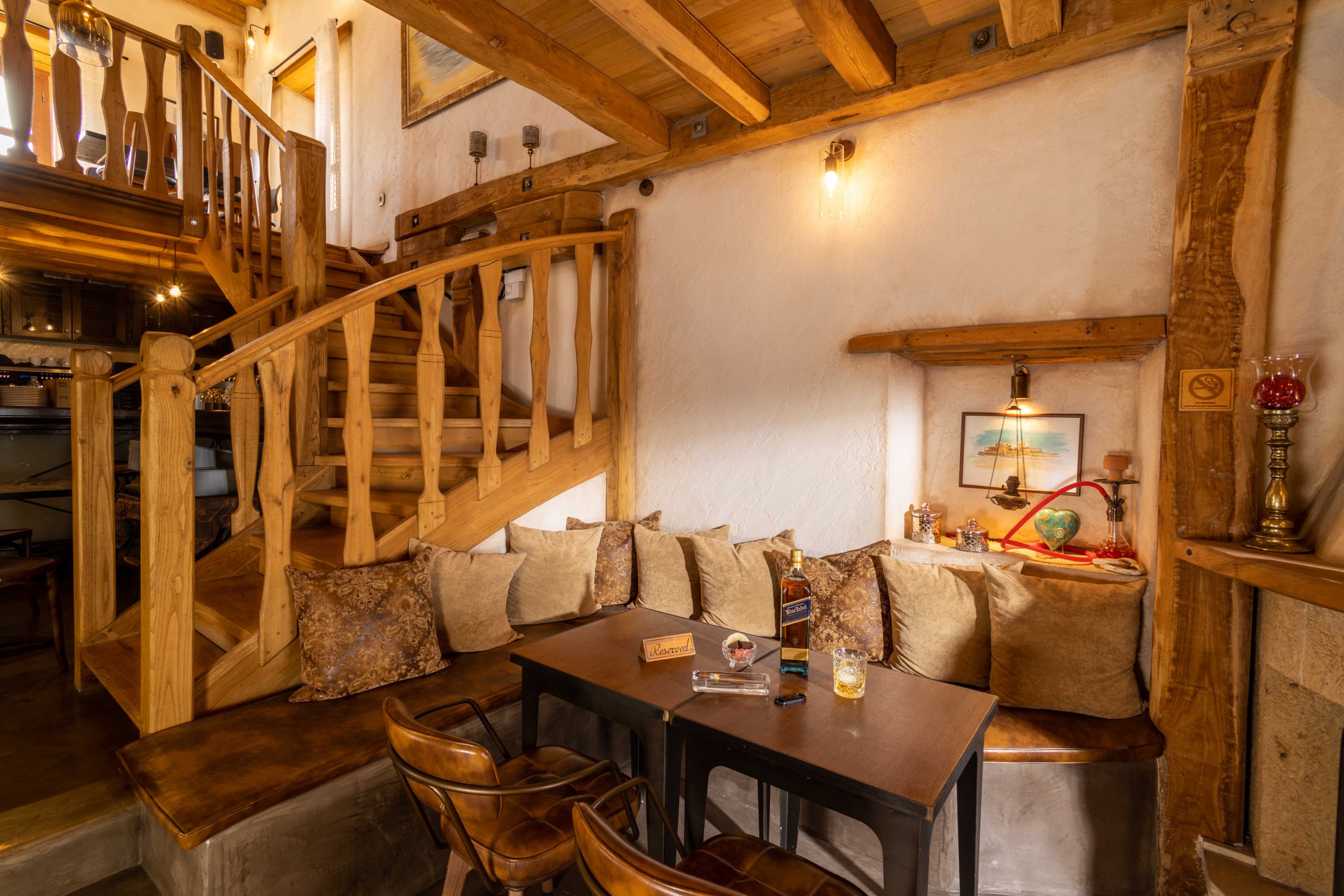 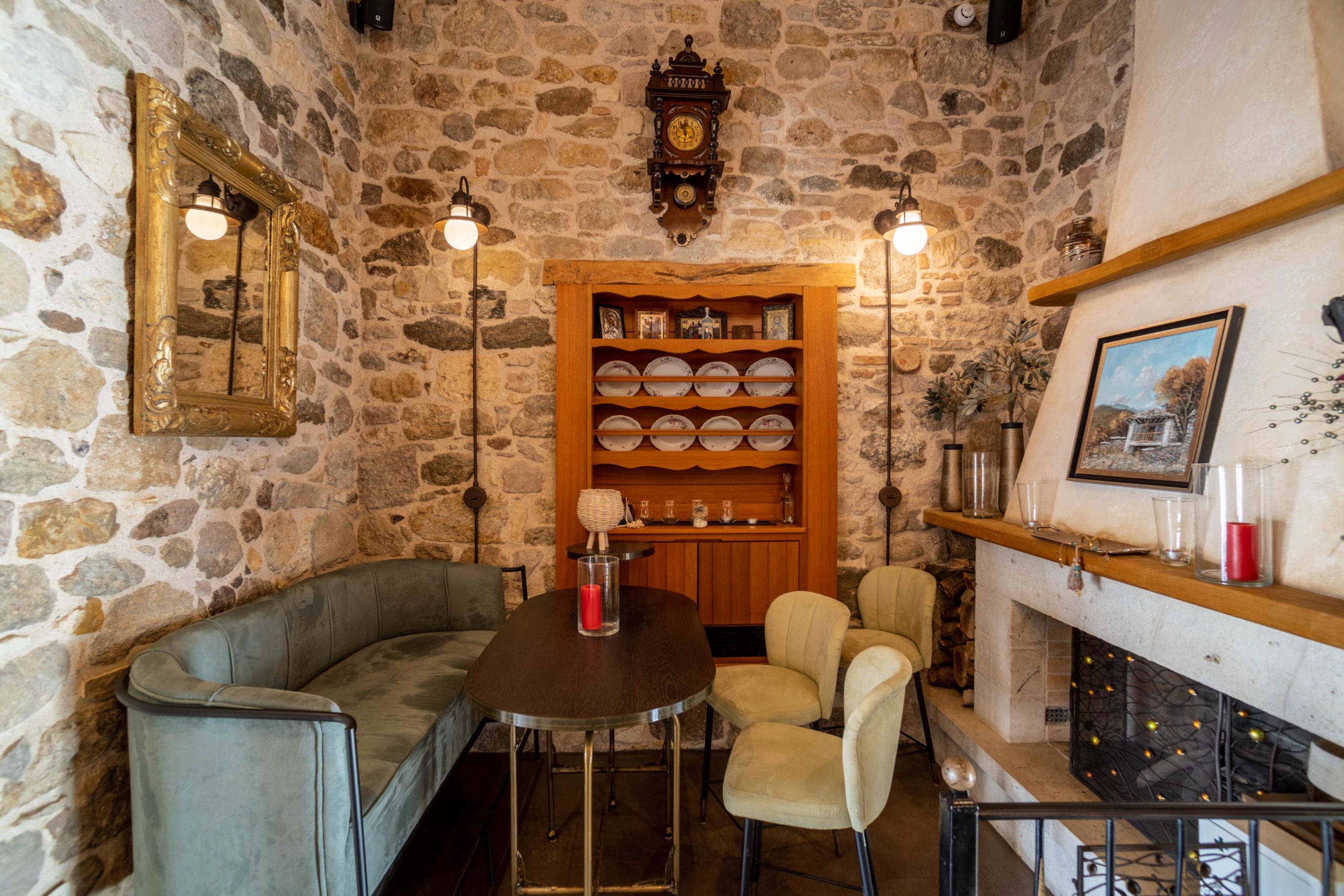 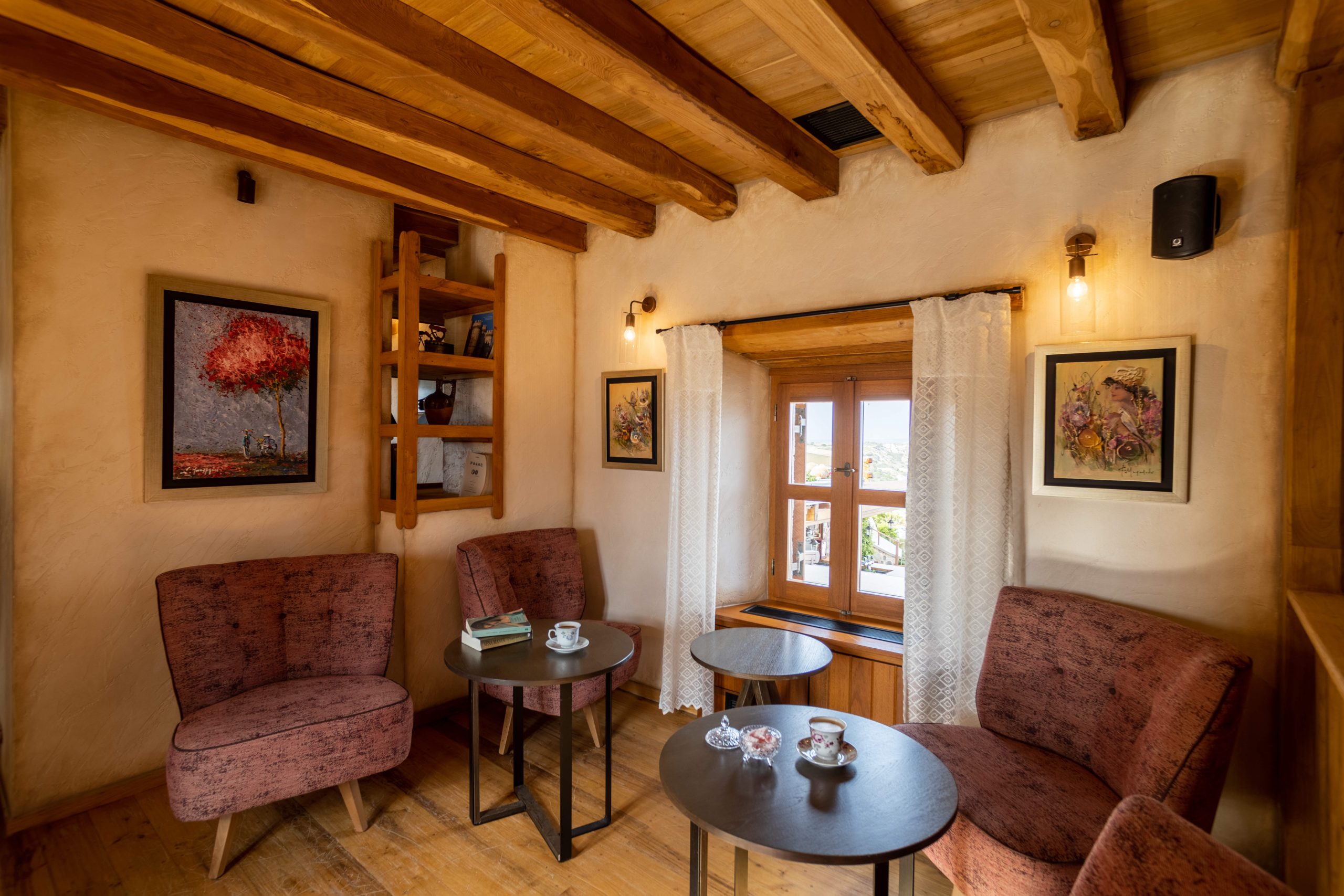 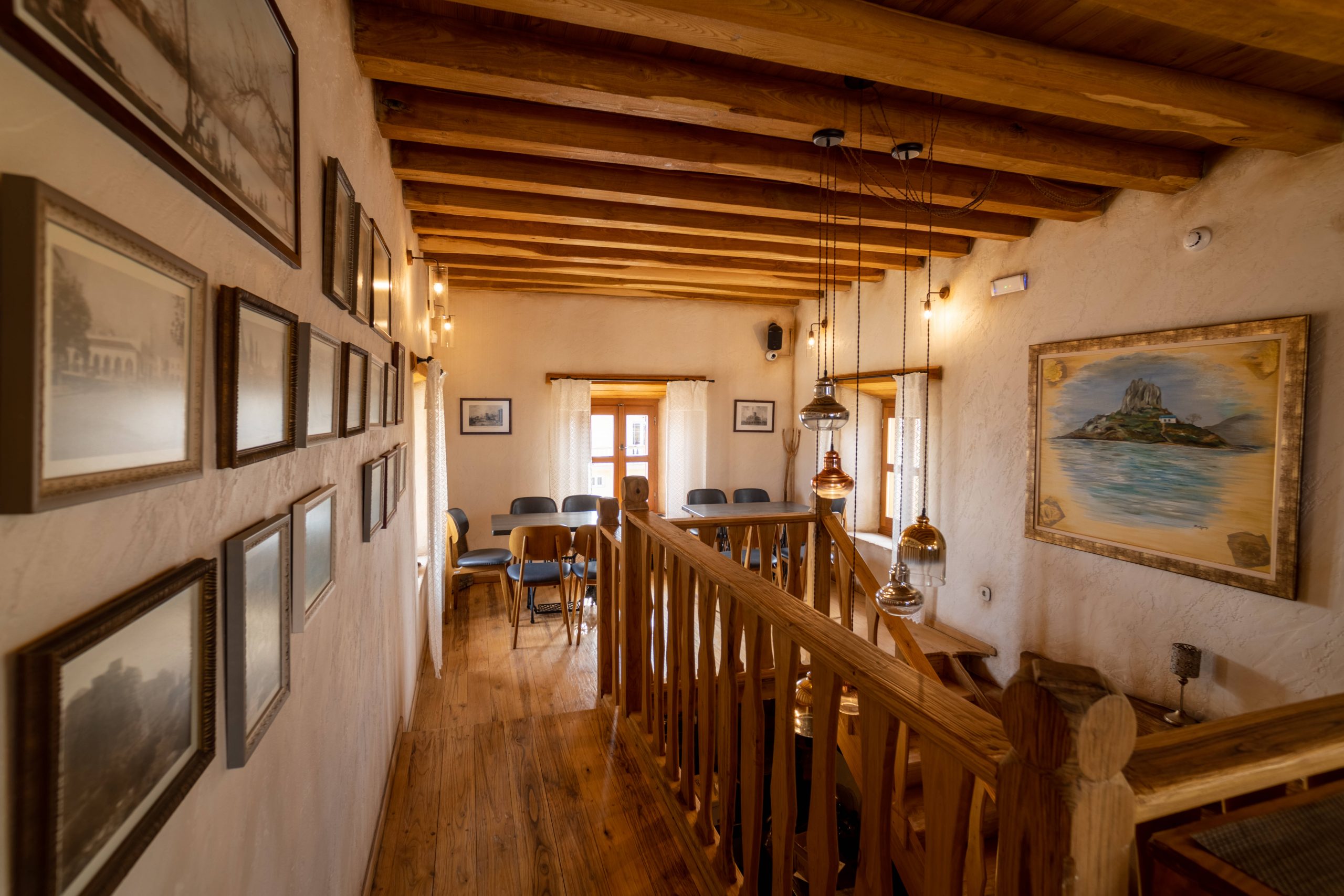